Main goal of our research was to verify some of the widely-used media statements, that can be just impressions not based on the data. Examples of such statements are:

“Airbnb is still expanding at an astonishing pace!”

“Airbnb has a potential to destroy the hotel industry!”

Therefore, we set goals of our research as follows:

a) Airbnb establishment offer is expanding.

b) The expansion pace does not significantly change over the time.

c) Airbnb expansion does not significantly differ over European regions.

Over the years, there were many start-up companies (example of such start-up companies is pronajmuse.cz or airdna.co.) established that built their business on helping people with renting their flats with Airbnb. One of the activities these companies do (except of advertising the place, cleaning, key exchange etc.) is estimating the optimal price daily. Therefore, they collect the data about all establishments, their prices and availability and suggest the most optimal price to their clients. Our data were collected from airdna.co.

We obtained the data about hotel tourism from Eurostat. Potential issue with Eurostat data quality is that they are based on surveys and they are not always complete (some years are missing for some regions), however we consider this to be a minor issue as it occurs only in small amount of regions.

From Eurostat, we gathered the data about tourists’ overnight stays. This side of Airbnb business is clearly not accessible – we can access only data about Airbnb offers, so Airbnb overnight stays can only be estimated. Our estimation is described in following chapters and is based on assumption, that structure of offered Airbnb establishments and their occupancy rate did not change significantly in time.

The gathered data from airdna.co and from Eurostat are of different regional granularity level. While Airbnb data are for cities (except of Crete and some other Mediterranean islands), Eurostat data are for NUTS2 regions. Therefore, from Eurostat we gathered data only for the cities from the NUTS2 region (they divide the data for cities/towns/rural areas) and from Airbnb we summed up statistics for the cities inside the region.

Figure 1: Map of the cities involved in the study. Green, blue, red and yellow colors indicate the regions.

To be able to estimate Airbnb market share for comparison with hotel industry, we had to assume, that structure of offered Airbnb establishments and their occupancy rate did not change significantly in time. Without this assumption, we would not be able to estimate Airbnb overnight stays in past years for comparison with hotel industry. We derived two estimations from available data – low and high and chose the optimal estimation in ⅓ distance between these two for reasons, mentioned below.

Calculating Airbnb between-year growth was based on establishment offer, as it reflects the growth (and overnight stays is only estimation assuming the structure did not change). Number of flats should correspond with number of tourists, as the supply-demand correspondence rate is very flexible in this case.

Calculating hotel between-year growth was based on overnight stays, because establishment offer does not reflect change on the demand side (number of hotels and hotel rooms offered does not correspond with number of tourists).

The results contain regions with the highest and lowest Airbnb growth rate, average Airbnb and hotel industry growth pace in the four regions and the estimation of Airbnb market share.

Table 1 and Table 2 list the regions with Airbnb highest and lowest growth speed. The important trend we can see in the tables is that the lowest growth rate regions include a significant amount of the South European regions. 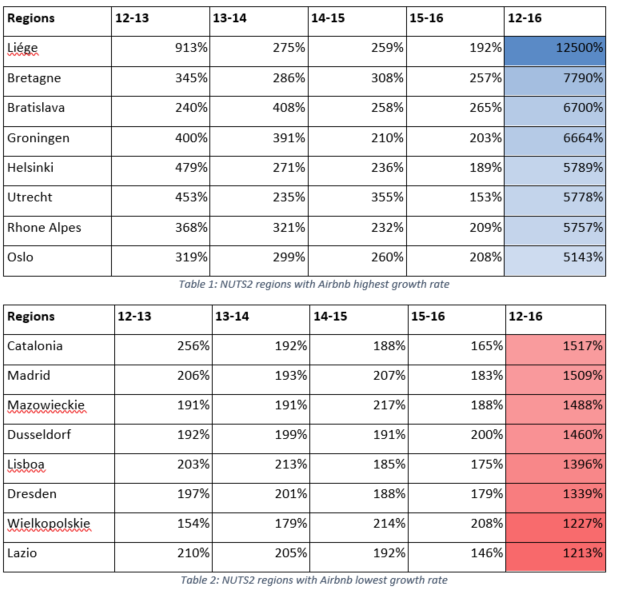 Conclusions based on results depicted in Table 3 and Figure 2 are summarized in following list:

The hotel growth rate is stable, doesn’t change significantly in the last years, as depicted in Figure 3. It indicates it is a mature market. The quickest growth among the regions is in the Eastern Europe, however the differences between regions are much smaller than in the case of Airbnb.

Estimated Airbnb market share in comparison to hotel industry is gradually growing and in 2017 it could reach 10 % in the Western and the Eastern Europe, while in the Southern and Northern Europe will probably not cross this threshold next year.

While collecting the data, we identified following main issues with their usability:

The hypothesis was verified. Airbnb establishment offer is expanding in all regions contained in the study.

The expansion pace does not significantly change over years

The hypothesis was denied. Expansion pace is slowing down. We can see the quickest slow in the Northern and Western Europe.

Airbnb expansion does not significantly differ over European regions

Thy hypothesis was denied. Initially the slowest growth was in the Southern and Eastern Europe. However, in the Western and Northern Europe the growth slowed down significantly. Extrapolating this trend, we can still expect significant growth in the Eastern Europe, but in the rest the market will reach its maximum in the nearest years.

As we can expect estimated Airbnb market share to reach more than 10 % of market in 2017, it certainly has the potential to negatively influence hotel industry. However, hotel tourism is growing in stable pace since 2012, so we cannot affirm negative influence of Airbnb tourism.